On a warm summer day in 1975, Al Courchesne was driving through the East Bay on his way to go camping in the Sierra Nevada mountains. As he entered Brentwood, a small city in Contra Costa County, he found himself looking at some beautiful farmland. He’d been farming in Hawaii for the past couple of years and had been hoping to move back to California where he’d grown up. 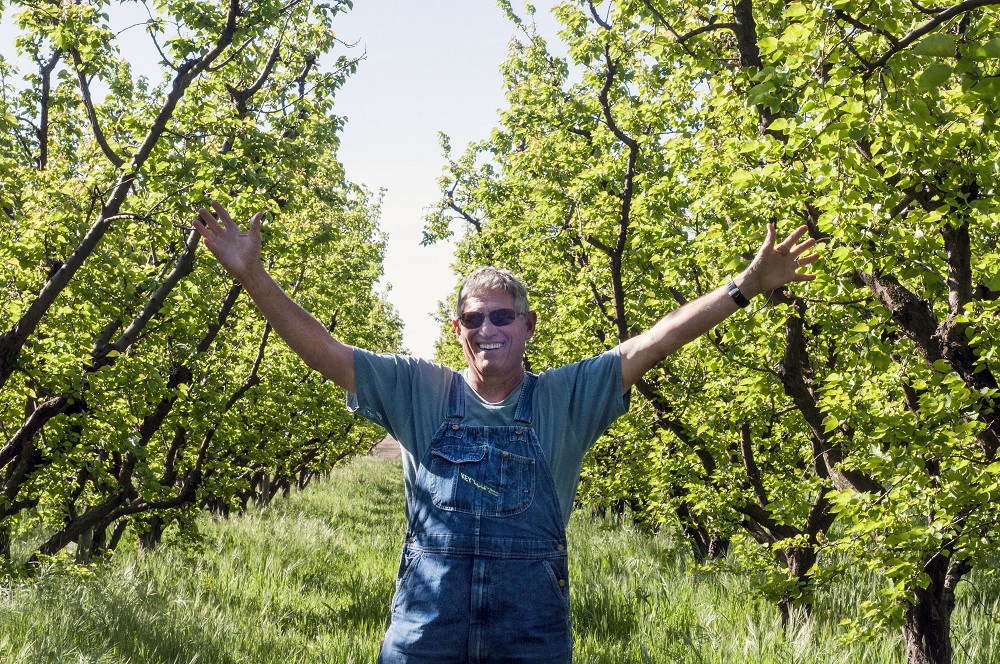 “My antenna was keenly tuned in to all things about farming,” he recalls. “And when I saw that farmland, I was thrilled!” He quickly pulled over to stop at a farm stand where he bought some tomatoes for his camping trip. Impressed with their quality and the landscape he saw around him, he decided he’d make some inquiries into land availability in the area. Fast forward about six months, and he was the proud owner of 13 acres in Brentwood. 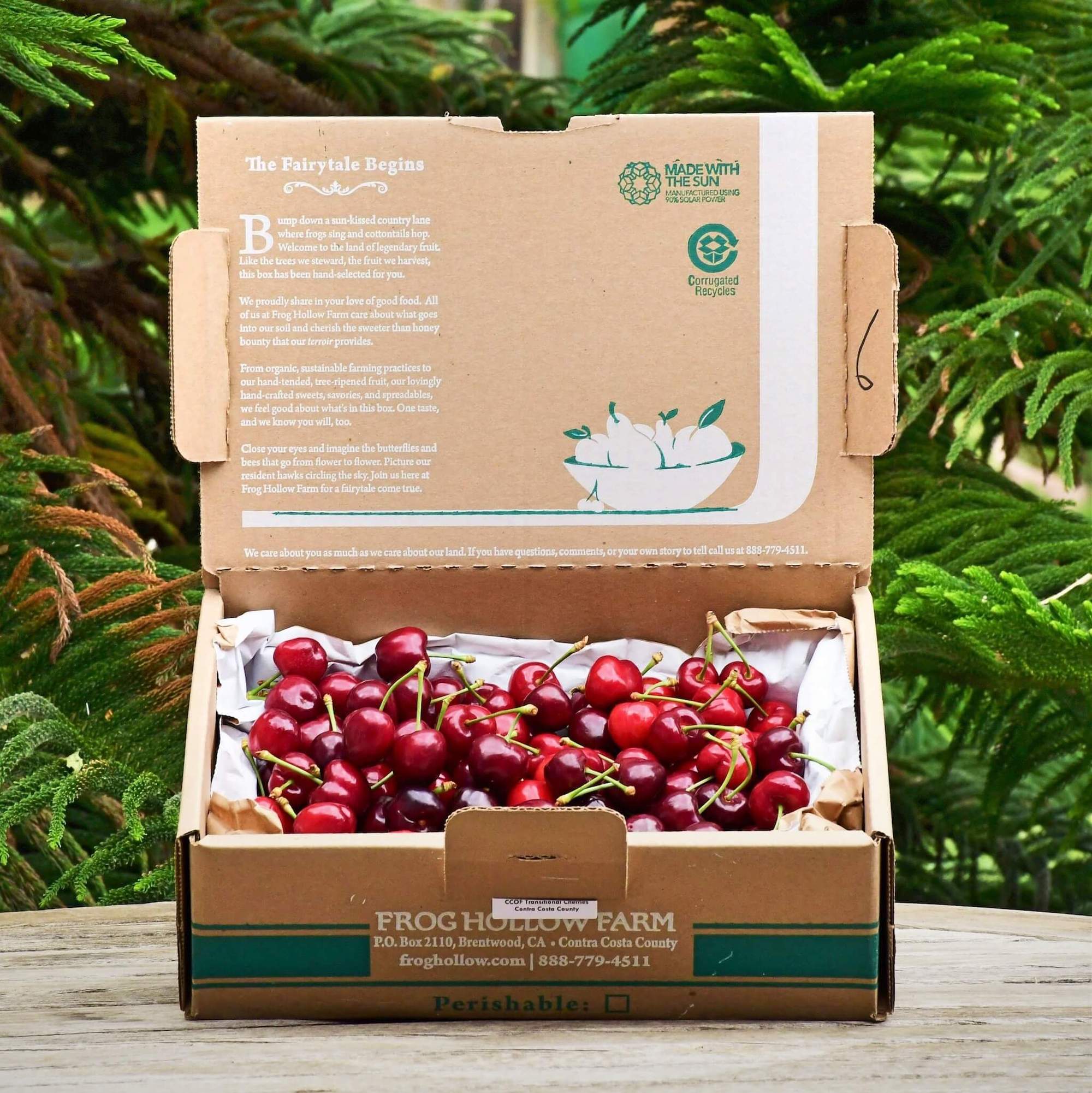 Back in ‘75, when Courchesne first looked at the Brentwood acreage, the man showing him around, Eddie Pippo, told him, “‘Buy this ground; plant peaches; you’ll make nothing but money!’” Courchesne ended up taking his advice. “I did buy the ground, and I did plant peaches, and I did make enough money to keep expanding,” he says. 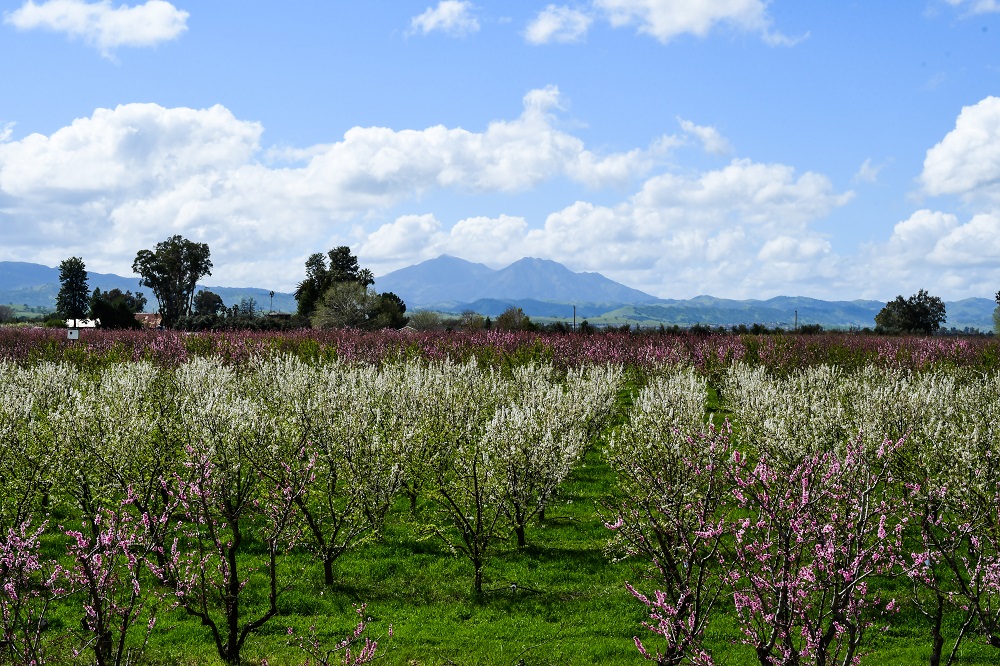 Because farming is risky business, Courchesne likes to approach things in a gradual manner. Initially, he planted just five acres of peaches and grew corn on the remaining eight. Corn was what the prior owner had been farming, and it was a crop that Courchesne knew he could make money on right away (peach trees take about four years to come into production). As time went on, he planted more peaches, acquired more acreage, and began planting other types of fruit trees as well. (He also started growing a small amount of vegetables for a CSA, which he still offers today.) 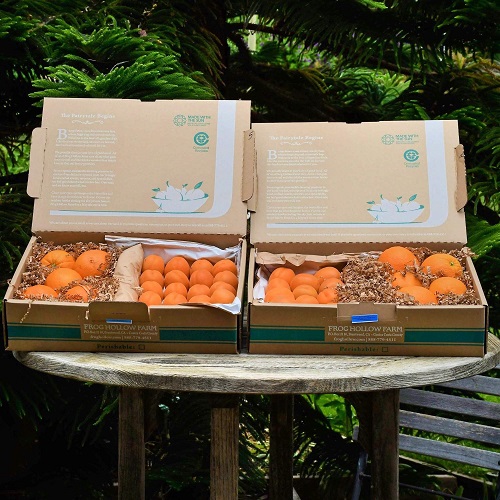 For his first 13 years in Brentwood, Courchesne farmed his land conventionally. He’d cut his teeth as a farmer in Oahu, learning techniques from neighboring Japanese vegetable growers. “They all used chemicals,” he says. “I had always wanted to be organic … but then, of course, when I started farming, I was a complete greenhorn! … So I dropped the idea of becoming an organic farmer because I basically felt like I had to do what my neighbors were doing and learn from them.”

His decision to go organic in 1989 was in part influenced by Louis Falcon, an entomologist at UC Berkeley who was researching organic ways to control codling moth in pears and apples. Falcon had asked Courchesne a few years earlier if he would let him use his orchard as a testing site, and he agreed. 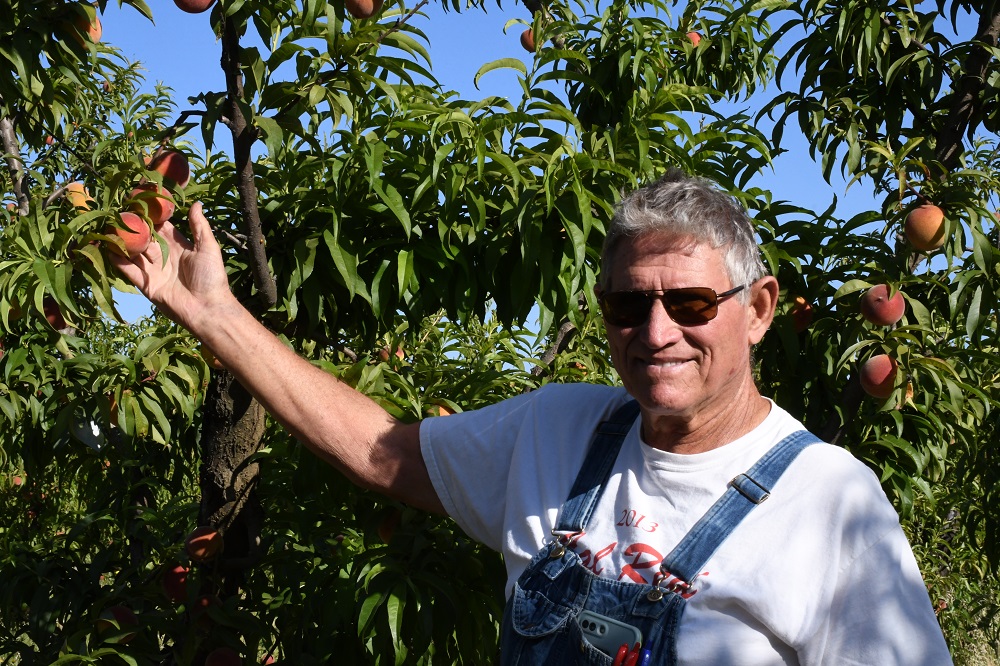 “It was like a five-year experiment, and during that time, he reassured me that any kind of insect was easy to control organically,” recalls Courchesne. “And then I started hearing more from other farmers as well, [including stone fruit] farmers, who were already trying organic farming. … Over time, I began to realize that it was something that was definitely doable. … So in 1989, I made the decision to go organic and that was it!” 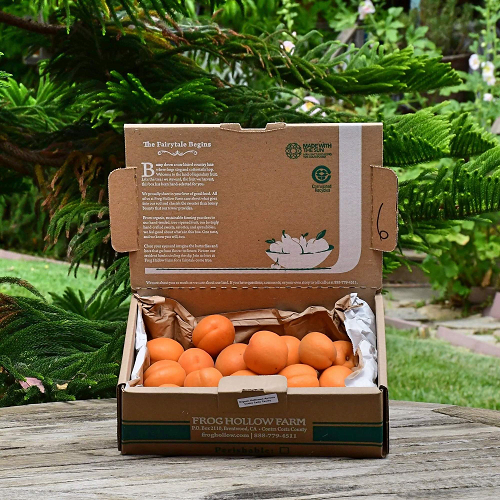 To say Courchesne loves his land would be an understatement. “The terroir of Frog Hollow Farm is amazing,” he raves. “We’re right on the San Joaquin-Sacramento River Delta, so we’re next to a large body of water. … We’re also on the edge of these cooling breezes at night that come in from the Bay. … That relieves the trees of stress and allows them to recover from the heat of the day, and we think that’s one of the factors that enables them to produce more sugar.” Courchesne is also very proud of his farm’s deep, mineral-rich alluvial top soil, which he explains is the result of sediment washing down the Sierra Nevada mountains for thousands of years. (Before California built its damns, the Brentwood area was essentially a flood plain.)

At one point several years ago, in the hopes of securing Brentwood’s future in agriculture, Courchesne had a vision of the region becoming a community of small family farms. However, he ended up changing course, deciding instead to expand his own acreage. “There’s only one thing harder than farming, and that’s trying to do political or community work,” he quips. “And that’s what you have to do to accomplish that dream that I was talking about and dreaming of five years ago.”

He realized that simply expanding his own operation would be a far easier way to preserve Brentwood’s farmland. Plus, his farm already has an element of community—he provides on-site homes for 10 of his year-round field workers and their families, about 25 people in all. 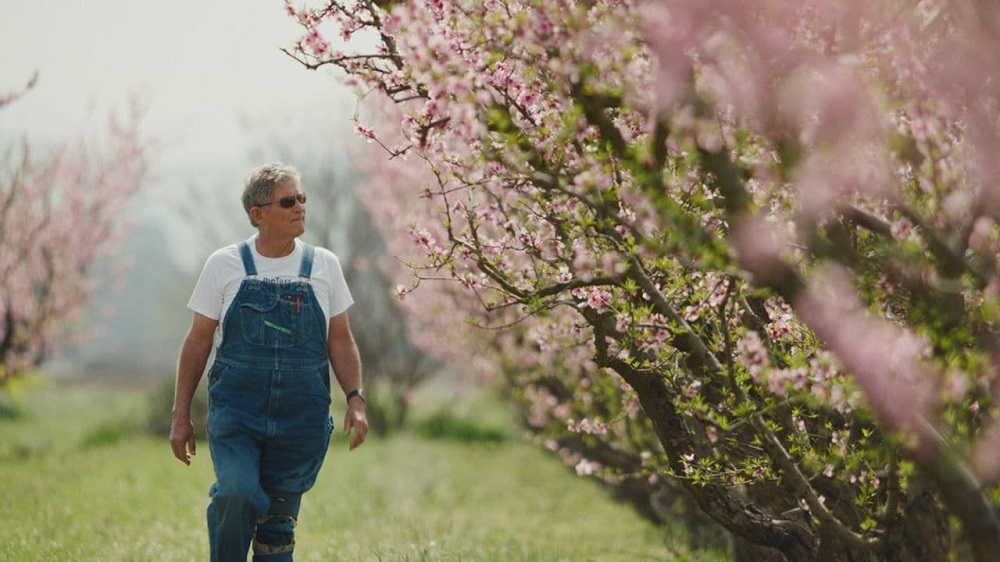 These days, Courchesne is dealing with some growing pains, which have come from doubling Frog Hollow’s acreage in the last five years coupled with some unfortunate weather events—a freeze in 2018 and warm temperatures mixed with rain the following year, which led to fungal issues. Like many other organic farmers, he’s also concerned about the downward price pressure that’s been occurring ever since Amazon bought Whole Foods and as other big companies move more aggressively into organics.

Yet despite these challenges, Courchesne remains optimistic. His farm has a very healthy growth rate—overall sales are increasing about 10 to 20 percent each year. And he continues to employ his favorite business strategy—diversification. He not only diversifies his crops but his product types and sales channels, too. He produces fresh fruit, sundried fruit, and value-added products like jams, which he sells to multiple retailers and wholesalers as well as directly to consumers via mail order, CSA, farmers markets, and a cafe in San Francisco’s Ferry Building. 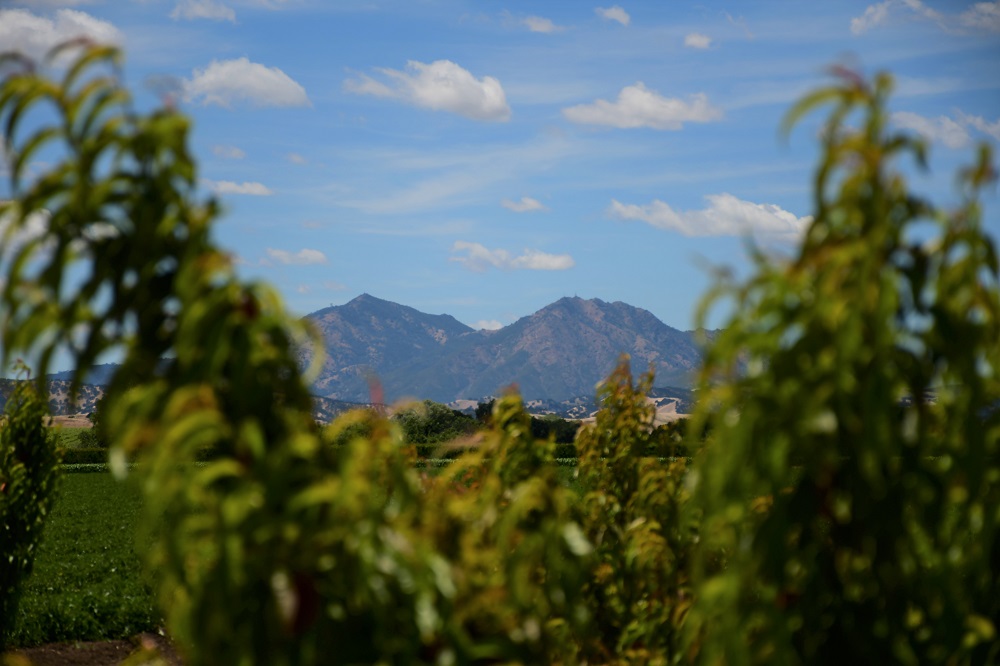 Courchesne also takes comfort in his competitive advantage as an organic stone fruit grower. When asked what it’s like to grow and sell a product as delicate and bruise-prone as peaches, he says, “What I do is something that not too many people are going to do. And so it’s a business that’s not going to be emulated by a whole lot of people.” He chuckles, then adds, “There’s a certain amount of job security.”

This was a good season for cherries as California’s crop was expected to reach close to six million cartons, with about half of the production picked and sold by mid-May, while Washington organic production is still limited.

Rick Lejeune is CEO and co-owner of Heath & Lejeune, a CCOF-certified organic produce wholesaler based in Los Angeles County. Operating out of an 83,000-square-foot warehouse, Heath & Lejeune currently distributes well over a million packages of organic produce a year and also offers storage, logistics, and consolidation services. Rick joined OPN to talk about his passion for organic farming, his company’s transition from conventional to organic, how the COVID-19 situation has affected business, and more.

Chico State University's Organic Vegetable Project is a labor of love for Professor Lee Altier and his students. The school's three-acre farm grows more than 50 varieties of produce, and provides ongoing research opportunities for students.

1. Poll Shows Consumers Value Organic More Than Ever in Pandemic

2. Justice Department Responds on Behalf of USDA in Organic Lawsuit