In Their Words: SÜPRMARKT's Olympia Auset

Olympia Auset is the founder of SÜPRMARKT, a low-cost organic grocery that makes it affordable to eat well in South Central and in neighborhoods across LA. Since its founding in 2016, SÜPRMARKT has distributed over 35,000 pounds of organic produce through its pop-up markets and weekly delivery service.

It is currently raising the funds needed to open and operate a retail space in the heart of South Central, which would be the area’s first organic grocery store.

In addition to running SÜPRMARKT, Auset also serves on the board of Co+opportunity,one of the nation’s highest-grossing food co-ops with locations in Santa Monica and Culver City. She recently joined OPN for a conversation about her work.

WHAT LED YOU TO START SÜPRMARKT? 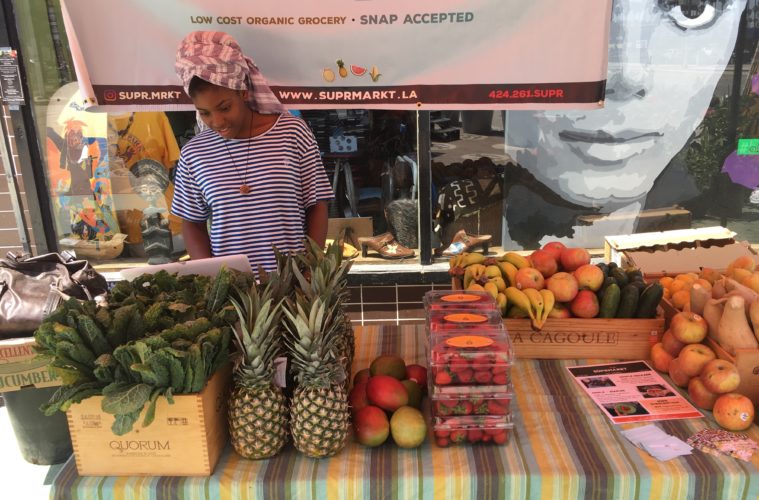 WHY DID YOU DECIDE TO GO 100-PERCENT ORGANIC IN TERMS OF THE PRODUCE YOU PROVIDE?

In these communities, a lot of times, the fruits and vegetables the residents have been exposed to growing up or on the job—they’re really trash. It’s like the worst kind of produce possible, and so it gives people an idea that fruits and vegetables are nasty because a lot of the food they’re tasting doesn’t taste like anything, or it just tastes like pesticides.

WHERE DO YOU SOURCE YOUR PRODUCE FROM? 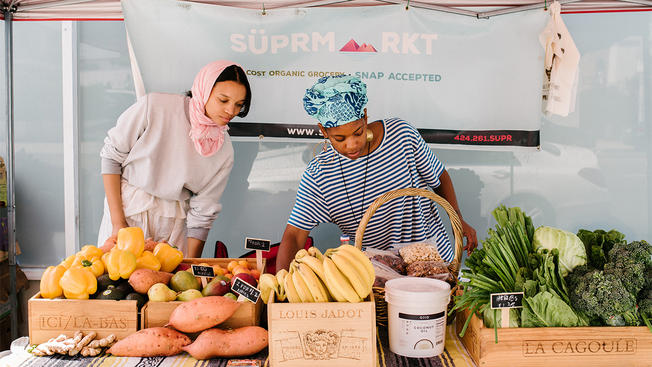 HOW DO YOU KEEP PRICES AFFORDABLE?

The way we keep it affordable is we just choose not to charge more than we would want to pay. SÜPRMARKT was born, like I said, out of necessity, and so I never want to see the day where one of our avocados is three bucks because I can’t afford that, and so many other people can’t afford that. So if there’s something that is too expensive, we just don’t sell it. We wait for the price to go down.

We also have been mostly volunteer run up to this point, and we’ve been a pop-up, so that’s helped to keep costs low. And our nonprofit SÜPRSEED helps underwrite some of the costs of our business.

WHAT’S IN A TYPICAL SÜPRMARKT BOX?

It changes from week to week, and we try to get the input of our customers so that they’re getting things that they like. This past week, we had bananas, apples, broccoli, tomatoes, plantains, and carrots. People could choose between kale or chard, cilantro or green onions, sweet potato or Yukon potato. And they could also add to their box, if they wanted, pears, pineapples, celery, or cabbage. And then we also have dates, cashews, walnuts, coconut oil—things like that available separately. And we normally have coconuts, which is probably my favorite fruit. Organic young coconuts are so delicious! 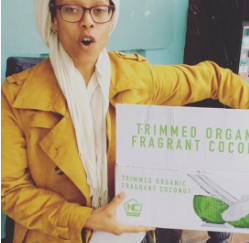 TELL US ABOUT YOUR NEW PROJECT TO OPEN AN ORGANIC GROCERY STORE IN SOUTH CENTRAL. HOW DID THAT COME ABOUT? HOW IS IT GOING?

So South Central has about 1.3 million people and only 60 grocery stores, and none of those grocery stores are organic grocery stores. What that looks like is that there’s mostly fast food chains and liquor stores. There’s a few grocery stores here and there, but a lot of them don’t really have quality fresh food.

Sometimes some of the chains will bring their produce that’s spoiling on one side of town to South Central, so a lot of these stores have a rotting smell to them. Our mission is to open the first-ever full-service organic grocery store in South Central so that people can stop having to leave their neighborhood to get healthy food.

We started fundraising in May of this year. There used to be this one restaurant called Mr. Wisdom that was like the only place that you could go for a veggie burger or anything like that, and he’d been there for three decades. And we found out that this place was closed in April, so we’re raising funds to be able to purchase the place from the people that bought it. More than just a grocery store, it’ll be a place where people can get affordable vegan meals, which are also very hard to come by in the area, and it will also be a community center offering classes, screenings, workshops, and more.

Our nonprofit does 10-day juice cleanses, health film screenings, and all sorts of health education, so a physical location will allow us to sustain and expand that. We need to raise about $200,000 more in order to bring the project to life, and we’ve raised about $110,000 so far from more than 1,400 backers.

WHAT KIND OF IMPACT HAVE YOU SEEN SÜPRMARKT HAVE ON THE COMMUNITY? IS THERE A SPECIFIC PERSON YOU’VE SEEN IT TOUCH THAT YOU CAN SHARE AS AN EXAMPLE?

There’s so many people honestly that I don’t know which one to pick. For instance, we just put on SÜPRFEST, South Central’s first-ever vegan festival, and the feedback was incredible. About 1,000 people showed up and literally nothing like this ever comes to this neighborhood, so people were just very grateful—hugging the vendors, saying, “Thank you for coming to our community.” A lot of the vendors sold out within the first few hours. 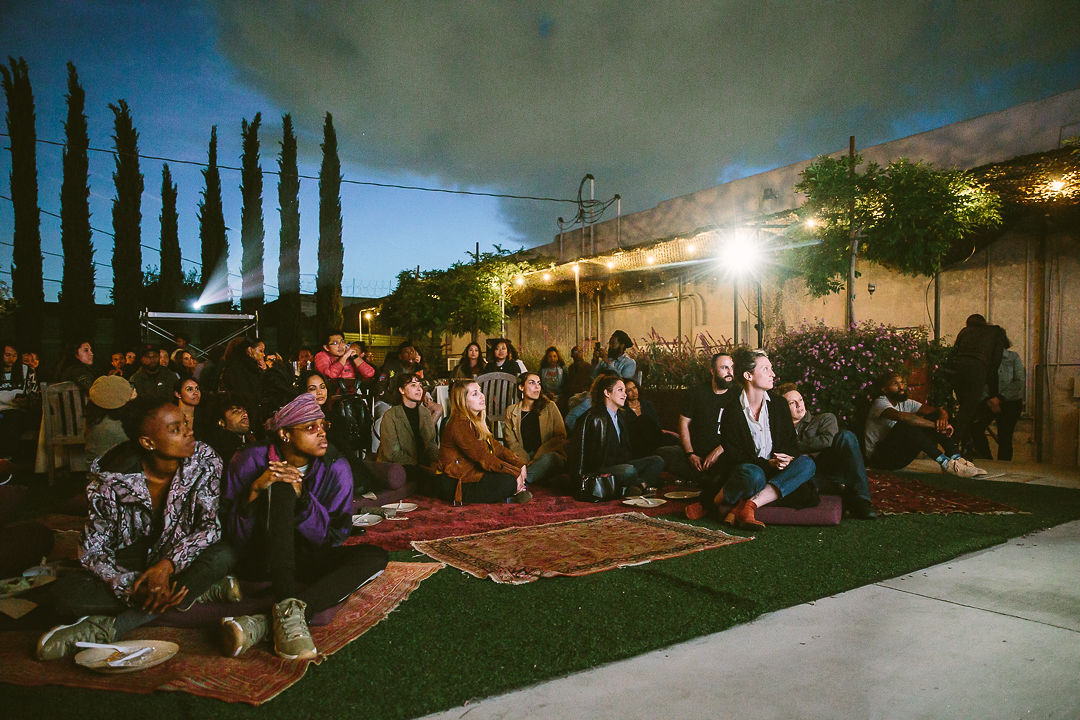 WHAT ROLE DOES EDUCATION PLAY IN YOUR WORK?

That’s one of the big necessities—education and experience. And that’s what our nonprofit SÜPRSEED really works to create. It’s one step to provide access to the food, but the other thing you have to do is let people experience the food and help people understand how to use the food. Tasting is believing!

We really care about creating a complete system for food access, and that’s why SÜPRFEST was so important. If you invite people out to try the food, then you get rid of the stigma in their mind that healthy food is nasty. And then you also get their wheels turning, saying, “Oh I want to create something like that at home.” And that’s when you follow up with educational workshops and cooking classes and things like that, which we’ve done in the past and we’ll be able to do more of once we have the actual grocery store space.

HOW CAN PEOPLE SUPPORT SÜPRMARKT?

People can support SÜPRMARKT by getting their groceries with us if they live in the LA area.  We deliver across LA, not just to South Central, so people can get groceries for themselves really affordably. They can also support other people—we have a one-for-one program. But the biggest thing we have right now is our campaign to raise the rest of the funds to open the organic grocery store.

And so any contribution of any amount is very much so welcome to our Indiegogo campaign or via Paypal. And also if people have relationships with brands and with companies to where they can get their company to back us, that’s really helpful as well. Beyond that, the best way to support our work is to become informed about our food system and then help inform and empower others.

An exclusive showing of the award winning Driscoll’s documentary The Last Harvest, which shines light on the labor shortage and immigration reform, will be held at the upcoming Organic Grower Summit, followed by an open forum discussion among produce industry leaders.

Last week, California’s Department of Food and Ag’s “Comparable-to-Organic Cannabis Working Group” met for the fifth and final time, with the task of developing a program for organic cannabis registration in California that is comparable to the National Organic Program (NOP) by 2021.

Organic Produce Sits at the Convergence of Consumer and Retail Trends

‘Tis the season…for holiday meal planning and shopping, and for the publication of annual trend reports. From flavors, ingredients, menus, attitudes, lifestyles, and beyond, trend watchers are publishing what to expect in the year ahead. Heading into 2020, organic produce sits squarely at the intersection of leading consumer and retail trends that are expected to strengthen, deepen, and endure in the decade ahead.

In Their Words: SÜPRMARKT's Olympia Auset

Organic Produce Sits at the Convergence of Consumer and Retail Trends