A half dozen presenters took center stage during the recent Organic Grower Summit in Monterey, CA, to discuss new strategies and opportunities to use cutting-edge agricultural technology to help farmers cut costs, increase revenue and improve efficiencies on the farm.

The Ag Tech Disruption “Educational Intensive Session” was broken into two parts. While there was crossover in these new innovation, the first three speakers discussed new technologies in the growing end of the business with the second panel talking about advances in the utilization of yield on the production end of the operation. 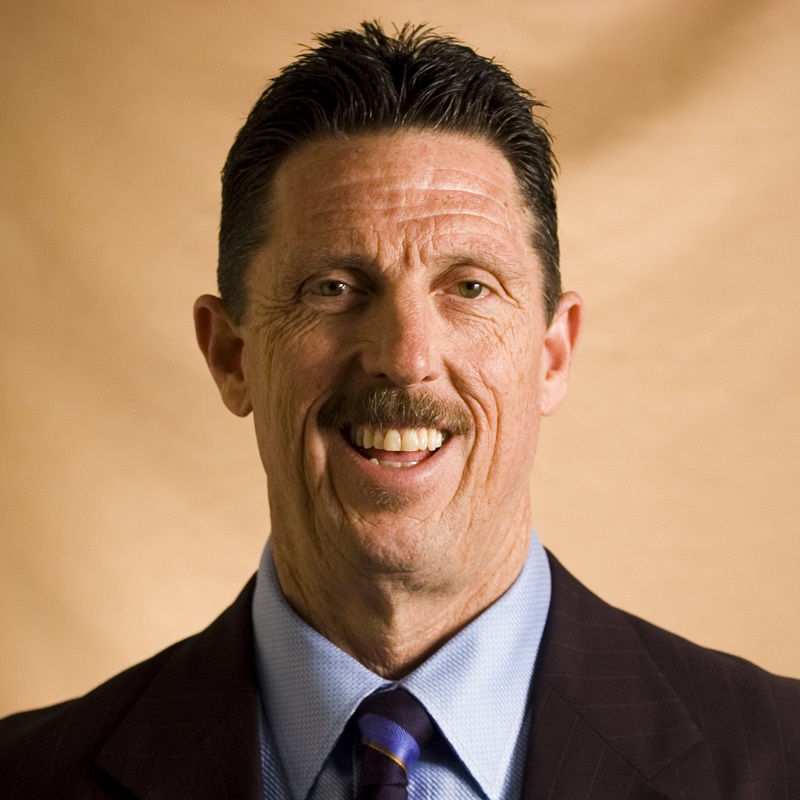 Hank Giclas, senior vice president of science, technology & strategic planning for Western Growers, served as the ring master while there were separate moderators setting the stage for each seminar segment. The WG executive relayed the role his association is playing in facilitating advances in the industry with the Western Growers Center for Innovation & Technology (WGCIT). Currently there are more than 60 WGCIT resident companies, in varying stages of development, working on high-tech solutions in the ag space. Their universal goal is to disrupt the industry by looking outside the box to solve the industry’s thorniest especially in the areas of labor, water and on-farm productivity.

PART I - Disruption in the Field

Cory Lunde, senior director of strategic initiatives & communications for Western Growers, moderated the first panel discussion noting that production agriculture is in a battle for survival knowing that it must do more with less.  It must produce more food and do it with less land, water, labor and other inputs. He noted that there is general consensus that it is only through the adoption of new technologies that this will occur.

Smallwood hails from Oklahoma where he and his partners have developed a closed loop system in which they farm fish and plants together using the waste from the fish in the aquaculture system as nutrients in the hydroponic system used for plant production. They have produced numerous crops in the hydroponic part of the system. 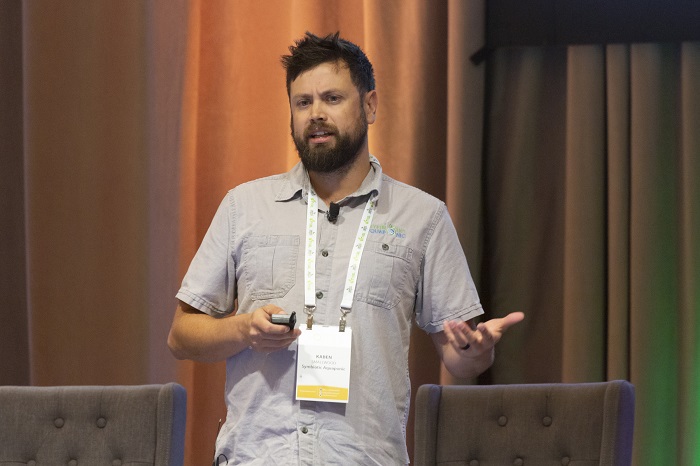 He said this feed conversion rate for fish is the gold standard as fish in the closed system expend very little energy as they don’t need to burn calories swimming upstream or standing and moving around as is the case with livestock.

Symbiotic Aquaponics has built two operations in Oklahoma and Smallwood believes it represents the future. His company has partnered with several schools, non-profits, tribal group and communities with the goal of building these facilities locally and handling the needs of a specific community. Symbiotic Aquaponics is a certified organic operation. 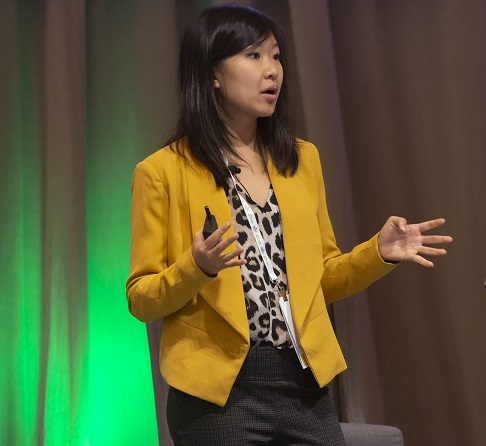 Wu of Trace Genomics explained that her company is basically using genetic and DNA testing to get a much more precise view of the soil biology. She indicated that in some ways growers are farming blind by not knowing the makeup of their soil before they plant a crop on a particular plot of land. Wu said that in farming most solutions to issues and concerns are prescriptive with the farmer looking backwards at a problem that occurred on a particular field and attempting to solve that problem moving forward.

Trace has developed soil tests that delve deep into the makeup of the soil and can give farmers a precise look at the soil in any particular field and allow them to address issues before planting the crop. Wu said farmers know that certain fields over-perform but they don’t know exactly why. Through testing and comparative analyses, Trace Genomics believes it can direct farmers to the crops they should grow on a particular field, and the precise inputs that should be applied on that crop. 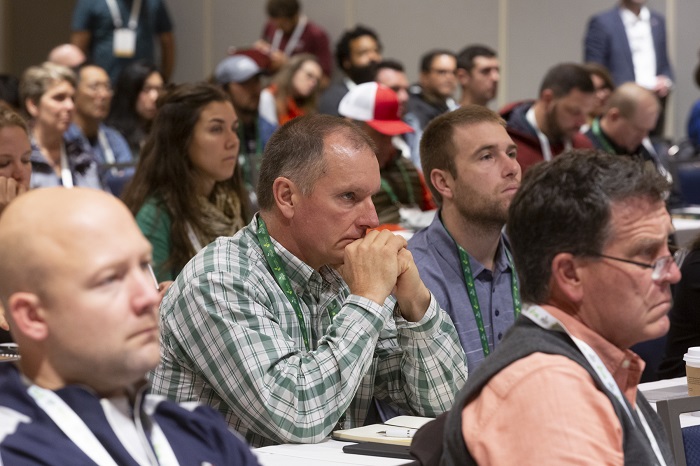 Wu said the company’s business model works for any size farm as it requires four steps: collect a sample; digitize the soil’s makeup through DNA testing; decode the information; and finally interpret the results for the grower. The growers collects the samples themselves and mail them to Trace, making the service very affordable. “In every tablespoon of soil there are millions of microbes that do different things,” she said, noting that it is understanding the entire ecosystem of that specific soil that will lead to improved production. 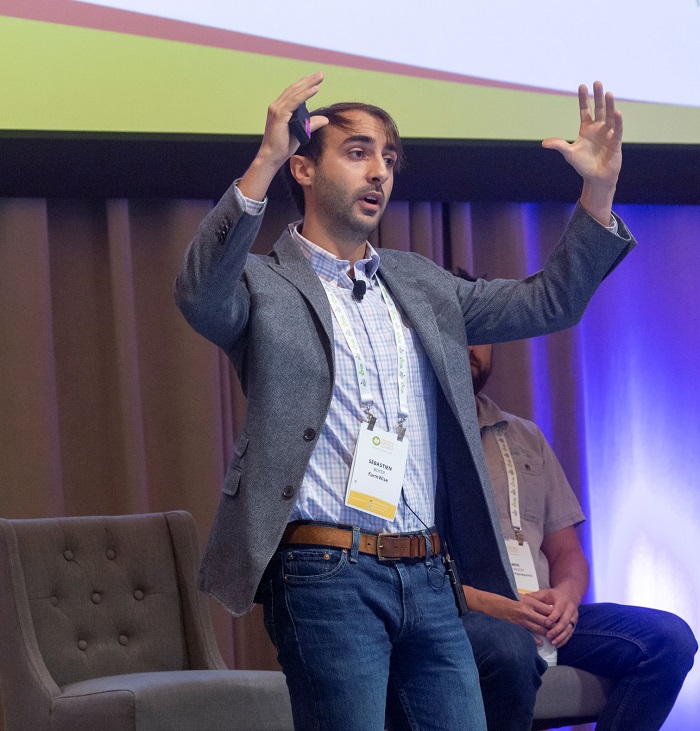 The final speaker in the first panel was Sebastian Boyer of FarmWise, which is in the business to offer autonomous, robotic-based farming services utilizing artificial intelligence. The company’s business model focuses on creating custom robotic systems and providing services to growers on a per acre basis in much the same way that an agronomist or an ag chemical company works. “We are automating at the crop level,” he said, adding that the business model requires no staffing, maintenance or upfront capital investment by the farm.

The company is using robotics already developed for other industries and adapting them to agricultural uses such as weeding and eventually crop harvesting. Mechanical weeding is the first service the three-year old company is offering and Boyer claims the cost of the service is less than hiring a crew to provide the same service. 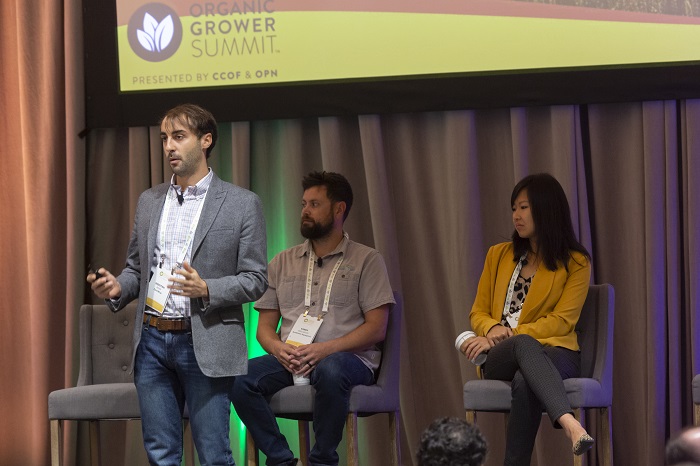 Lisa Spicka, associate director of the Sustainable Food Trade Association, moderated the second half of the “Disruptors” seminar and focused her attention on food waste with each of her panelists offering technologies that help put more of what is grown on the table and less in the trashcan.

A trio of keynote speakers at the Organic Grower Summit presented definitive action each are taking to address some of the major problems facing Mother Earth.